Using the Wisdom of Solomon

Here in the Web Site Office, we have received a number of e-mails from people fighting sin. Some say they are being attacked on every side or that they seem to be fighting one temptation after another. Each asks if there is some effective way to win the battle against sin; if there is some Biblical solution to combating temptation and stopping it before the sinful action manifests itself.

Wouldn’t that be wonderful? To actually have a method or tool or maybe a Biblical model that we could use to stop the process of sin BEFORE it resulted in the final sinful act. Notice that I called it the “process” of sin. All sin begins somewhere. Let’s notice this process stated in the Word of God.

James 1:14-15
But every man is tempted, when he is drawn away of his own lust, and enticed. Then when lust hath conceived, it bringeth forth sin: and sin, when it is finished, bringeth forth death.

The process of sin begins with temptation and temptation begins with a thought. If we had a tool that could both recognize the tempting thought, then kill it before we became enticed (or attracted to go further) then we could stop sin in our lives all together. Stop the initial thought and you stop the sinful action from taking place. Fighting sin is a mental battle. Our model for fighting sin exists in actual military battles. Solomon knew about preparing for battle and it is from him that we obtain our method for winning the battle against sin.

After Solomon became king, he set about to build the temple and strengthen Israel. He accomplished the latter by building and fortifying 3 key cities that lay directly between Egypt to the south and Mesopotamia to the north and east. He knew that if he controlled the trade routes with strong fortified cities, he could control both country and commerce. It is in how he fortified those cities that we find the model for fighting sin. First notice the three city-strongholds he had built.

I King 9:15
And this is the reason of the levy which king Solomon raised; for to build the house of the LORD, and his own house, and Millo, and the wall of Jerusalem, and Hazier, and Megiddo, and Gezer.

Now if you are going to fortify a city you must strengthen its weakest point, the gate. Solomon, in his God-given wisdom knew that if he could devise a clever way of designing the city gates, he could overwhelm any armed force that attempted to gain entry through that gate. To better understand this gate design, see below for a model of the city of Megiddo. 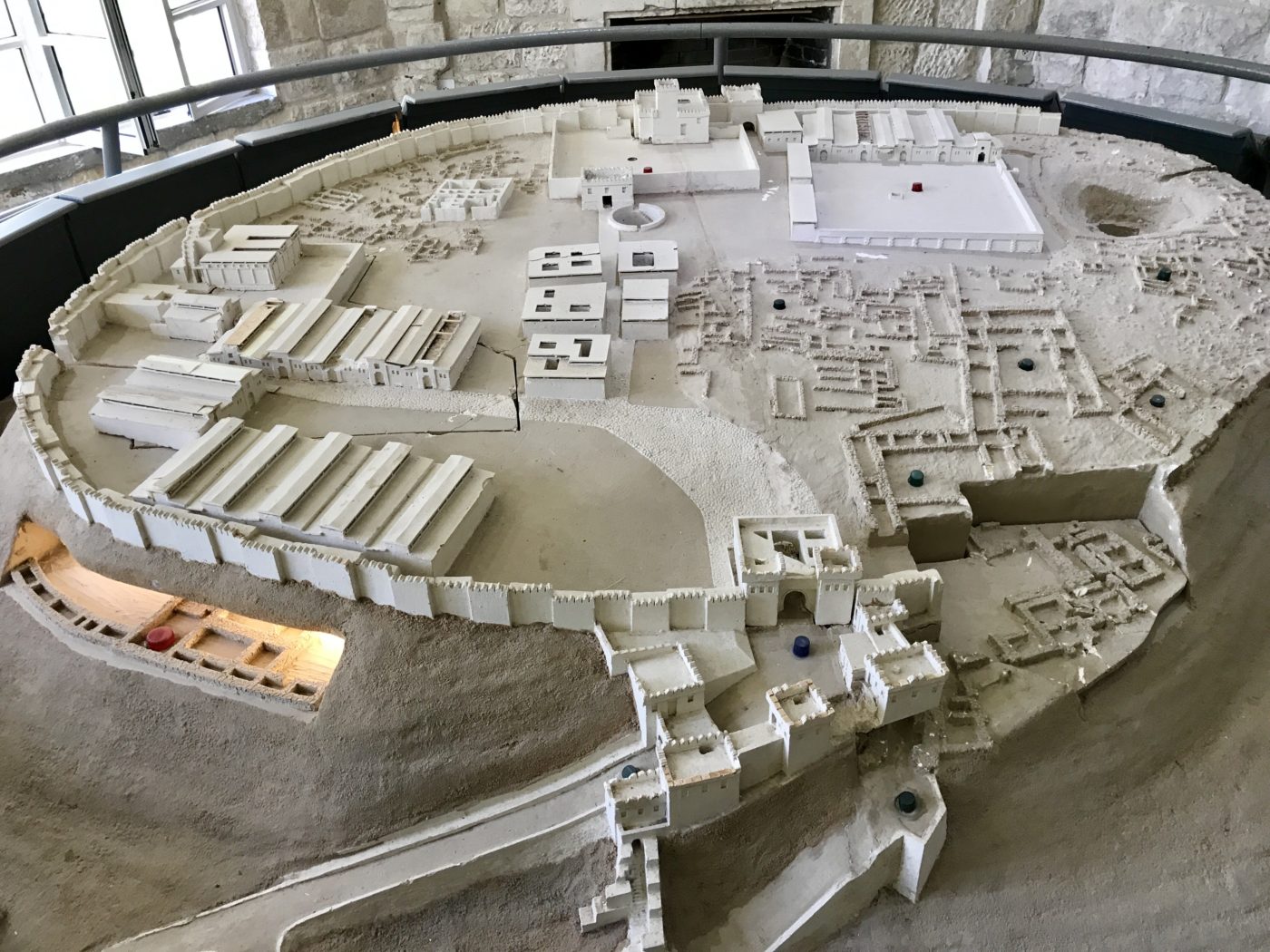 Note: To see models and photos of Megiddo and the gate structure visit these web sites:

Notice first that the city is built on a hill. The enemy forces must trudge up-hill to an outer battlement by means of the road you see to the left. The road meets the outer, two-chamber gate: One chamber on each side of the gate passage itself. The gate is covered in iron lest the enemy set a wooden one afire. If they get by the outer gate and into the courtyard they are surrounded on all four sides by high battlements. The enemy must now turn left, still going up-hill and into the portal of the main gate. This is a six-chambered or Solomonic gate with 3 rooms on either side. This was Solomon’s design. The Oriental Institute excavators, as well as Israeli archaeologist Yigael Yadin attributed the design to King Solomon. When the city was under siege, the defenders would fill these chambers with soldiers. As the enemy moved into the gate passage, assuming they could get the huge gate open, they would be overwhelmed by the soldiers streaming out of all 6 chambers. As some of the defenders were killed, fresh solders were lowered into the chambers from trapdoors atop the high battlements thus insuring overwhelming forces to meet the enemy. Have you ever given thought to defending the gates of your mind in the same way described here?

Your mind; your brain, is set high upon your shoulders. It is surrounded by a protective skull that acts every bit as the wall surrounding Megiddo. Your mind has gates too; gates that must be defended. Most of our thoughts, especially lustful thoughts are generated by what we see and hear in the world. Our eyes and ears react to the outside stimuli. Thoughts are generated by those outside stimuli in our conscious mind. I liken the conscious mind to the outer courtyard in our Megiddo model. Now, it is here, in our conscious mind, that we stop the evil and negative thoughts. As the lustful or negative thought enters our consciousness, first identify it as a watchman standing on the high battlement looking down into the outer courtyard. If you deem the thought negative or sinful, then sound a mental alarm and imagine soldiers streaming out of the chambers forcing the thought clear out of your mind, past the outer gate and into the lower valley far outside the walls. Sure, it is a mental exercise but it works because the soldiers represent the Spirit of God.

In a recent sermon, Mr. Armstrong described the most effective way to get sin out of our lives. He had us picture an empty cup and likened the air in the cup as being the sin. He stated that one couldn’t remove the air by attempting to suck it out. However, if one pours water into the cup, the air is forced out. It is interesting that God uses water as a metaphor for the Holy Spirit. It is the same way with the Solomonic gate model; the soldiers, picturing the power of the Holy Spirit overwhelm the negative thoughts and force them from the gate and into the valley. They are destroyed.

Isn’t it interesting that Mr. Armstrong always describes the Holy Spirit as something that is placed into the frontal lobes of the brain, as if in the gate of our mind.

2 Timothy 1:7
For God hath not given us the spirit of fear; but of power, and of love, and of a sound mind.

Model Not Yet Complete

Our model for stopping sin is not yet complete. We have not discussed what else the Solomonic, six chambered gate was designed to do. As we read in the Word of God in our study of city gates, we find them the center of activity for the city. It was in the gates where much of the city’s social, business and legal interaction took place. Remember reading those verses all these years about the elders “sitting in the gate”? (Deut. 22:15, 25:7) I had always wondered how an elder could sit in a gate. Did he sit on the gate or on the ground where the gate was closed at night? After learning of the design of the gate, I now understand. They sat in those chambers to the right and left of the entrance to the city. Here, the reading of the law and proclamations took place (Joshua 20:4; 2 Chron 32:6; Neh 8:1,3). Court was held there (Deut 16:18; 17:8; Ruth 4:11). Prophets and priests delivered admonitions and pronouncements at the gates (Isaiah 29:21; Amos 5:10; Jeremiah 17:19). So we see that anything that had to do with the city passed through or took place at the gate. Everything that resides in our brain passed through the gates of our conscious mind. We begin now to see the importance of guarding the gates of our mind.

The gate represented the place of authority and the glory of the city (Isaiah 3:26; Jeremiah 14:2). The Israelites were instructed to establish this authority with judges at the city gates. Notice…

Deuteronomy 16:18
Judges and officers shalt thou make thee in all thy gates, which the LORD thy God giveth thee, throughout thy tribes: and they shall judge the people with just judgment.

One of the functions of the elders at the gate was to protect the city and their people from the outside world. The judges were there to interview those entering the city to be sure their presence was welcomed. Evildoers who might cheat, steal or break the laws of the city were not allowed to enter or stay in the city. Notice Deuteronomy 17 beginning in verse 2…

Deuteronomy 17:2-5
If there be found among you, within any of thy gates which the LORD thy God giveth thee, man or woman, that hath wrought wickedness in the sight of the LORD thy God, in transgressing his covenant, And hath gone and served other gods, and worshipped them, either the sun, or moon, or any of the host of heaven, which I have not commanded; And it be told thee, and thou hast heard of it, and inquired diligently, and, behold, it be true, and the thing certain, that such abomination is wrought in Israel: Then shalt thou bring forth that man or that woman, which have committed that wicked thing, unto thy gates, even that man or that woman, and shalt stone them with stones, till they die.

God admonishes us to do the same with our every thought…

2 Corinthians 10:5
Casting down imaginations, and every high thing that exalteth itself against the knowledge of God, and bringing into captivity every thought to the obedience of Christ.

These verses complete our model. With the power of the Spirit of God we are to “interview” or judge each thought coming into our conscious mind. If we find the thoughts to be evil, negative and not in keeping with the law of God then we are to “stone them with ‘Spiritual’ stones”…”till they die”. So whether you imagine soldiers, stones or a fast rushing wind, sweep the negative thoughts from the gates of your mind the second you identify them as such. Make this mental warfare a habit and it will become a part of your character. If we overcome the sin in our lives then God will allow us to enter into another gate that He has prepared for us…

Psalms 118:19-20
Open to me the gates of righteousness: I will go into them, and I will praise the LORD: This gate of the LORD, into which the righteous shall enter.

Revelation 22:14
Blessed are they that do his commandments, that they may have right to the tree of life, and may enter in through the gates into the city.