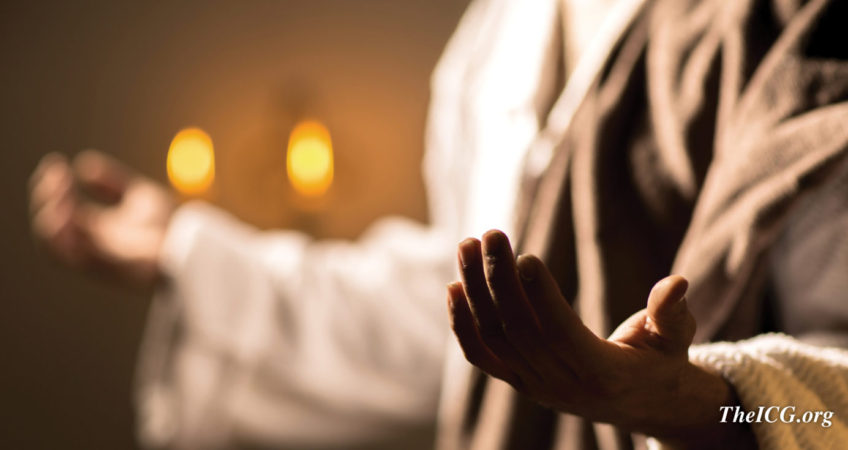 Jesus of Nazareth is the Christ, the Son of God and the Son of man. He was the prophesied Messiah of the Old Testament and is described throughout the New Testament as being both fully human and fully divine. As second member of the God family, He has existed from eternity as the “Word.” He divested Himself of His power and majesty and became a human being to die for the sins of all mankind as our loving and merciful Savior. He was then resurrected and ascended to heaven to become our High Priest and the head of all things to the Church. Jesus Christ shall return to establish the Kingdom of God on earth and rule as King of kings with His saints forever.

Jesus Christ is the chief cornerstone and foundation of Christianity, the focal point of both Old and New Testaments and of biblical prophecy. He is the one around whom God’s plan of redemption and salvation revolves.

Christ as the “Word of God” (John 1:1-14) has existed with the Father from eternity.   He and the Father together devised a plan to reproduce themselves and to expand their family by means of the human creation. This creation as accomplished by the one who became Christ through the agency and power of the Holy Spirit.  “For by Him [Christ] were all things created, that are in heaven, and that are in earth, visible and invisible” (Col. 1: 16). John adds that “all things were made by Him: and without Him was not any thing made that was made“ (John. 1:3). Thus the “Word of God”––Christ––was also the Creator God, who fashioned the universe and breathed the breath of life into Adam.

The being who later became Jesus Christ was likewise the God of the Old Testament and hence the one who walked with Noah and talked with Abraham and with Moses (John. 8:58; cf. Ex. 3:14). He was the God of Israel, the God of Abraham, Isaac, and Jacob. The God who gave His law to Moses at Sinai. He was the one who led Israel with a cloud by day and protected them by a pillar of fire at night. He was Israel’s Protector, their Guide and their “Rock” (“and that Rock was Christ,” 1 Cor. 10:4). He likewise was the God of David and was the one who dwelled in Solomon’s temple. He spoke through Isaiah, Jeremiah, Ezekiel and all the prophets and inspired the entirety of the Old Testament.

In order to fulfill the divine master plan of salvation, this great being divested Himself of all His power, might and majesty and took upon Himself “the form of a servant, and was made in the likeness of men” (Phil. 2:7). As envisioned, however darkly, by Abraham and Moses, and as prophesied by Isaiah and others, God’s “Word” was now incarnate, the Son of God and the Son of man. As a human being, Jesus led a sinless, perfect life although He “was in all points tempted like as we are, yet without sin” (Heb. 4:15). He overcame Satan’s temptations and qualified to replace him as ruler of this world. He was our example who learned obedience through suffering; He became our Savior whose atoning death paid the death penalty for all the sins of mankind.

This great personal sacrifice of Christ’s crucifixion is a perfect illustration of Jesus’ love and mercy toward us. In Christ’s own words the greatest love a man can have is to “lay down his life for his friends” (John. 15:13). And Jesus’ sacrifice for us is even more powerfully poignant in that, “While we were yet sinners Christ died for us“ (Rom. 5:8), “when we were [still] enemies” (verse 10) and not yet friends, Jesus laid down His life for us. Certainly the giving of His life on the cross (stake) for all humanity was the greatest example of the greatest love which can be shown.

Christ’s resurrection from the dead was the focal point of universal history––an event of ultimate importance without equal in the unfolding of God’s master plan. His burial for three days and three nights and His subsequent resurrection was the very sign and proof of His messiahship (Matt. 12:40). His resurrection proved that man could also be resurrected; it showed the viability of God’s plan and was the means by which human beings could eventually be resurrected to eternal life.

The death of Christ, the Creator of everything, was designed “from the foundation of the world” (Rev. 13:8) and was able to pay the penalty for the sins of humanity because His life was worth far more than the sum total of all the lives of all human beings who have ever lived or ever will live. Upon repentance and baptism, we have the opportunity to take advantage of Christ’s sacrifice to pay the penalty for our own personal sins, and through God’s grace to receive the gift of eternal life––which Jesus Christ’s life, death and resurrection made possible.

Christ has now ascended and is exalted at the right hand of God the Father at the throne of heaven. He is once again actually God, all-powerful and shining in the spirit realm like the sun (Rev. 1:13-16), yet with the same mercy and compassion He exemplified during His physical life. Jesus is the firstfruits of salvation, the first mortal to be made immortal, and the first human being to become a member of the God family. He is the Christian’s elder brother and the forerunner of our salvation, the consummate High Priest and Advocate, Intercessor and Mediator before God’s throne of mercy.

Jesus Christ, today, is the living head of His Church, actively, intelligently and personally guiding and directing it through the Holy Spirit of God. He is simultaneously fully involved in the relentless sweep of mankind’s historical events as He prepares to intervene in the end time of world history, returning to earth in full power and authority to take over the governments of this earth and to set up His divine Kingdom of God as King of kings and Lord of lords.

Christ, who began the creation, will also finish it. After the completion of His 1,000-year rule, Jesus Christ will turn everything over to His Father, and God Himself will join His billions of spirit-composed sons as the new heaven and new earth are created (Rev. 21). God and His family will then rule the universe forever, and of “the increase of His government … there shall be no end” (Isa. 9:7).